My boyfriends all-time favorite band, DBSK, or in this case, Tohoshinki, just releases the MV (drama version) of their newest single “Stand By U,” and the song is by far officially my ultimate favorite Tohoshinki song.

I remember hearing the song preview (I think it was almost a month ago) the first time. I was in the middle of procastinating, Youtube-ing my boyfriends DBSK videos, and when I clicked on the song I accidentally said a curse word (it starts with “S”), which is just a much more intense equivalent of “Wow.”

I think I like this better than “Doushite Kimi Wo Suki Ni Natte Shimattan Darou” (longest name of a song EVER). I was, at first, a bit disappointed by the MV this morning, but the more I watched it, the more I grew fond of it. The song itself was awesome. The good beat plus the beautiful melody (I especially like the chorus) plus the heart-breaking lyrics plus the wonderful voices of my boyfriends the guys equals BREATHTAKING… This song just ROCKS and I hope the guys get another Oricon Weekly… better yet, an Oricon. Monthly! Yeah, that’s right! Give them an Oricon Monthly!

SmileyBunny: …Since when do you use “FTW?”$

Welcome! Call me Meriken. I am an aspiring writer, and also dabble in digital art and calligraphy.

What do I write about? 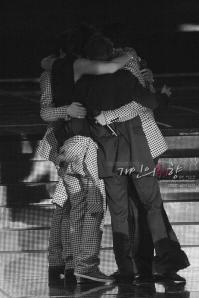 Even in separate ways, soar high and reach your dreams.

And when you have...